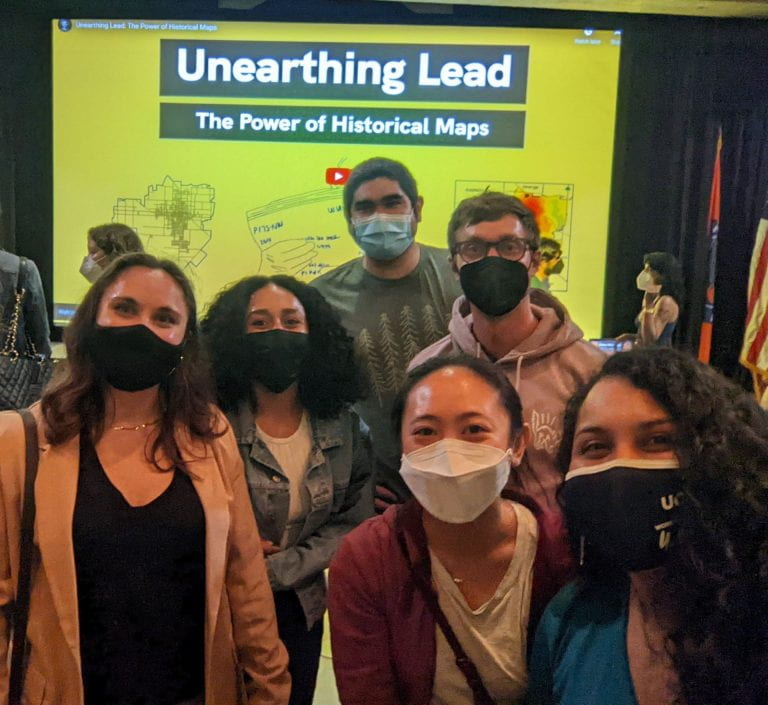 Irvine, Calif., Aug. 4, 2022 — A cross-disciplinary team of engineering, biological sciences, public health and anthropology graduate students from the University of California, Irvine took first place in Phase 1 of the Environmental Protection Agency’s Environmental Justice Video Challenge for Students for their “Unearthing Lead: The Power of Historical Maps” entry, which reveals the dangerous levels of lead in soils in Santa Ana.

The EPA asked college students across the country to create a video “demonstrating innovative approaches to identify and characterize an environmental justice issue in a select community using data and publicly available tools” and were encouraged to collaborate with neighborhood groups to bring a local perspective of challenge they are facing. The UCI student team collaborated with faculty from the Program in Public Health and members of the Orange County Environmental Justice organization to create the video.

Unsafe lead concentrations in the soil is a primary concern of Santa Ana residents in urban, disadvantaged neighborhoods. The video shows how a mixed-model approach combining historical and statistical methods was used to determine that lead-based paint and leaded gasoline were the two main sources of lead contamination which disproportionately affected the city’s communities with lower socioeconomic status.

“This award is a recognition of the collaborative relationships our team built between OCEJ and UCI researchers. Moving forward, the video will help launch the next phase of communicating the research findings on the national level, with the possibility to inspire action in similarly impacted communities,” said Tim Schütz, anthropology Ph.D. candidate and videographer. “It also supports my dissertation research about the role of data and digital technology in environmental activism. As part of the award nomination, our team is planning to submit a peer-reviewed journal article that discusses the use of videos, podcasts and other creative media that help make lead soil contamination a matter of public concern.”

“The video highlights how community-based organizations in the places most impacted by environmental injustices, such as OCEJ and GREEN-MPNA, who are featured in the video, are collaborating with UCI researchers to produce findings that will advance the understanding and mitigation of EJ problems by integrating community knowledge and techno-scientific knowledge in research practice,” said Connie McGuire, RJS director of community relationships and faculty advisor on the students’ EPA Video Challenge submission.

“It’s been such a privilege to work with such a dedicated and talented group of UCI students, faculty and community members on this important work relating to lead contamination in Santa Ana,” said faculty collaborator Shahir Masri, associate specialist of environmental and occupational health with the UCI Program in Public Health. “The team’s video will play a critical role in shedding a light on the environmental injustices facing Santa Ana residents, as well as those in other parts of the country and world to whom environmental inequities play a role in their everyday lives. The end goal, we hope, will be government-assisted remediation of the soil and access to resources to help prevent lead exposure in the community, particularly among the most vulnerable and socioeconomically disadvantaged neighborhoods.”

Jun Wu, professor of environmental and occupational health, and Alana LeBrón, assistant professor of public health, both with the UCI Program in Public Health, also served as faculty collaborators.

Awards of $20,000, $12,000 and $6,000 were awarded to the Phase 1 first, second and third place recipients, and the seven honorable mentions each received $1,000. A September launch is planned for Phase 2 of the competition, which will be open to all eligible Phase 1 applicants. Students will collaborate with their community partners to develop a strategy or proposal that demonstrates effective engagement and advocacy to address the environmental issues identified in Phase1.

About UCI’s Brilliant Future campaign: Publicly launched on Oct. 4, 2019, the Brilliant Future campaign aims to raise awareness and support for UCI. By engaging 75,000 alumni and garnering $2 billion in philanthropic investment, UCI seeks to reach new heights of excellence in student success, health and wellness, research and more. The Planned School of Population and Public Health plays a vital role in the success of the campaign. Learn more by visiting https://brilliantfuture.uci.edu/school-of-population-and-public-health/.

About the University of California, Irvine: Founded in 1965, UCI is the youngest member of the prestigious Association of American Universities and is ranked among the nation’s top 10 public universities by U.S. News & World Report. The campus has produced five Nobel laureates and is known for its academic achievement, premier research, innovation and anteater mascot. Led by Chancellor Howard Gillman, UCI has more than 36,000 students and offers 224 degree programs. It’s located in one of the world’s safest and most economically vibrant communities and is Orange County’s second-largest employer, contributing $7 billion annually to the local economy and $8 billion statewide. For more on UCI, visit www.uci.edu.

Media access: Radio programs/stations may, for a fee, use an on-campus ISDN line to interview UCI faculty and experts, subject to availability and university approval. For more UCI news, visit news.uci.edu. Additional resources for journalists may be found at communications.uci.edu/for-journalists.